The role of coffee in human life varies enormously. For some, coffee is a way to wake up, others only drink coffee because they think it is very tasty. So, in a way, coffee is very functional. But coffee also has a social aspect. After all, it is the heart of many social gatherings around the world.

When you say coffee, you say Italy. Here, coffee is usually consumed as an espresso - which is called un caffè in Italy (not espresso). Americanos are often only sold to tourists. In Italy you usually drink coffee while standing at the coffee bar. A quick shot of espresso gives you the energy you need to start the day off right.

Italians only consume cappuccino in the morning, at other times of the day this is a no go. This taboo is a result of their obsession with digestion. In Italy they believe that drinking a cappuccino in the afternoon is too heavy for the digestive system. So: if you order a cappuccino in Italy after 11 a.m., you run the risk of being labeled as a tourist right away.

Mexico is one of the largest coffee producing countries in the world. It produces 60% of all coffee worldwide. You would therefore say that Mexico has a rich coffee culture that was established centuries ago. However, this is not the case, as Mexico has not embraced its coffee culture until recently. Many restaurants served instant Nescafé coffee. That is because the most consumed hot drink in Mexico is tea, and hot chocolate is more popular than coffee.

In urban centers such as Mexico City, there are now many bars serving first-class coffee, grown at higher altitudes. This delicate coffee has a mild acidity and is known for its exceptional complex and flavorful taste.

Café de olla is the traditional Mexican coffee. The Mexicans serve their coffee in a clay pot (an olla). They filter the dark roasted coffee with a very fine sieve. It is served with piloncillo, a brown sugar with smoky caramel flavor. It is common to enjoy the coffee with a cinnamon stick for extra flavor.

The habit of drinking coffee from roasted coffee beans originates in Arabia. The earliest written record of coffee comes from Arab scholars. They wrote that coffee was useful in keeping them awake while they had to work for hours and hours.

Arabia therefore has a rich coffee history. Coffee has been an important aspect of hospitality in Arab societies for centuries. It is a ceremonial act of generosity. There are therefore strict guidelines for preparing coffee for guests.

The preparation of the coffee starts with the selection of the beans, which are lightly roasted in a shallow pan over a small coal fire. Then they pound the beans in a copper mortar. The coffee then ends up in a large copper coffee pot. They add water to the pot and put it on the fire. When the coffee is brewed, it is poured from the large pot into a smaller coffee pot, to be enjoyed again in smaller cups. It is important that the oldest guests receive the first cup.

When you say Austria and coffee, you say Wiener Melange. This Viennese coffee combines dark roast coffee with milk, which is topped off with frothed milk. If you're lucky, they'll add another good dollop of whipped cream to your coffee.

Austria is best known for its Kaffeehäuser (coffee houses). People in Austria not only buy coffee as a quick to go, they often consume it in Kaffeehäuser where they spend hours reading the newspaper, for example, and discussing new ideas with others. It's a real social affair.

A coffee ceremony in Ethiopia is an important part of the country's social and cultural life. An invitation to a coffee ceremony is therefore regarded as a sign of friendship or respect and is an expression of Ethiopian hospitality. This special ceremony often lasts a few hours.

Usually a young woman leads the ceremony, dressed in a traditional Ethiopian costume, a white dress with colored woven edges. On a bed of long grasses she sets up the jebena, a traditional Ethiopian coffee jar made of clay. She then roasts the coffee beans in a flat pan over a small charcoal oven. The aroma of the coffee mingles with the aroma of incense, which is always burned during the ceremony.

When the coffee beans are black and shiny, they are ground with a pestle in a mortar. The leader of the ceremony slowly stirs the ground coffee in the jebena (coffee pot), which is round at the bottom and covered with a straw lid. The coffee is passed through a fine sieve several times, as the ground coffee is anything but evenly ground.

NEXT →
The perfect espresso: How? 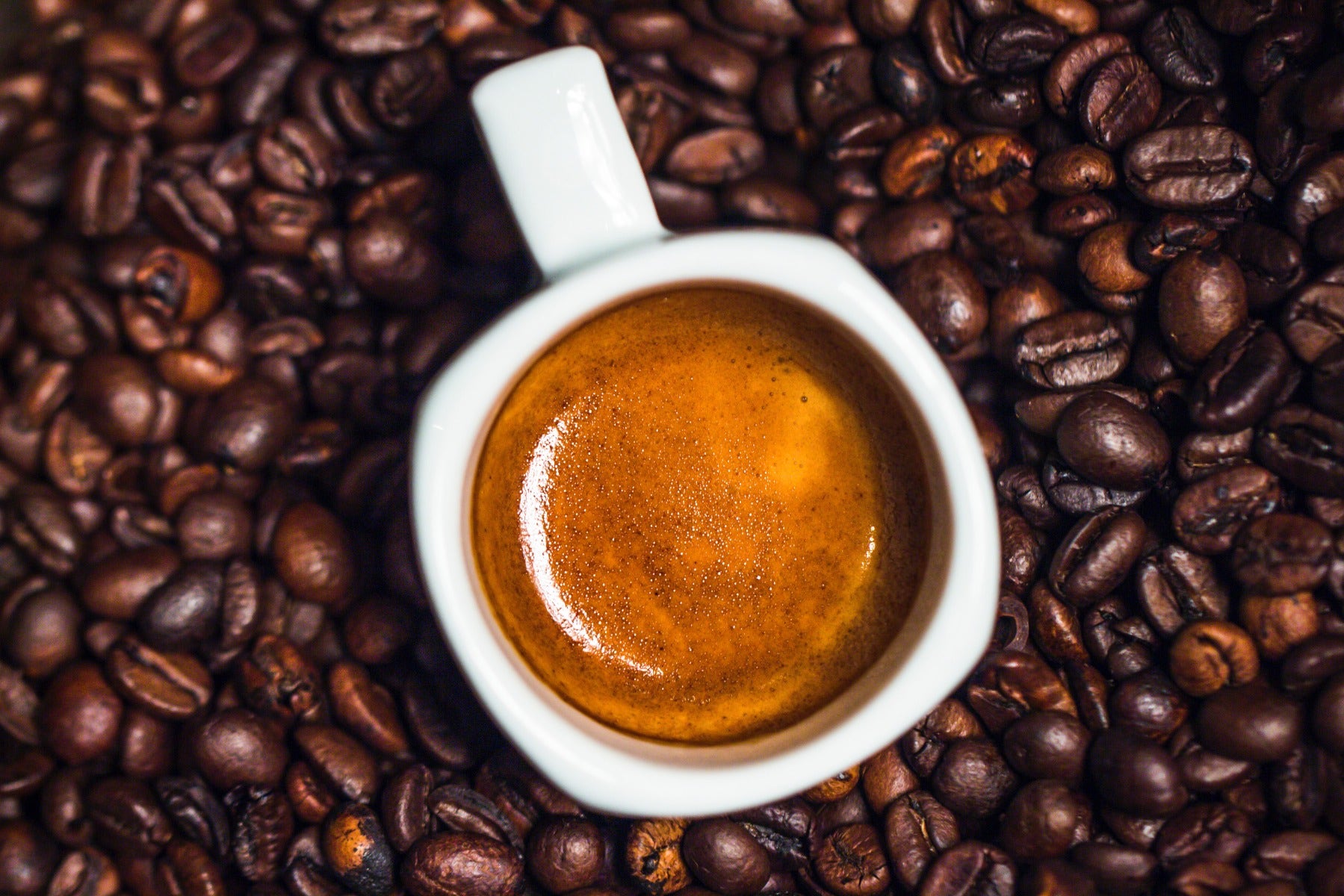